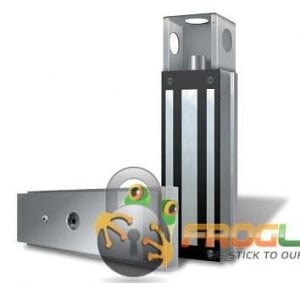 Froglock sells and installs a wide variety of magnetic locks that can accommodate any security level and situation.

Magnetic locks, also known as electromagnetic locks, use electrical current which causes the lock to become magnetized thus keeping the door from being opened. Because there are no moving parts they are low maintenance, long lasting and easy to install. For these reasons this type of lock is gaining popularity amongst business owners.

Froglock offers magnetic locks in a variety of sizes and types to suit any security application. We sell and professionally install magnetic locks throughout the New York area.

Why You Should Choose the Magnetic Locks

Magnetic locks are locking devices which consists of an armature plate and an electromagnet. The devices are used on sensitive doors and are of two types; fail-secure and fail-safe. The fail- secure devices remain locked when power is disconnected while the fail-safe are unlocked when power is disconnected. The electromagnetic lock is normally attached to the door frame and has an armature plate attached to the door.

Magnetic locks are normally used in exit doors because they hardly fail in the event of an emergency. The locks are strong and cost less as compared to other convectional locks hence they are they are preferred. The locks do not interact with levers and door knobs and are operated by a button that opens and closes the door. The locks have found a lot of applications in offices because they can be relied on during incidences of fire.

Some of the magnetic locks have electromagnets that attract a conductor with a force large enough to prevent the door from opening. They consists of a solenoid wrapped around a ferromagnetic material which amplifies the magnetic field produced creating a magnetic force.
Advantages of magnetic locks
Durability: the locks are more durable as compared to other convectional locks
Quick to operate: the locks are operated by switching power on and off hence they are valuable in a high traffic office where authentication is required.
Easy to install: The locks are easier to install as compared to other convectional locks because they do not have interconnecting parts.
Sturdy: The locks suffer less damage even when exposed to multiple of blows or when forced to open using a crowbar.
Have no moving parts.

The locks come with the following disadvantages
Requires a constant supply of power
Power outages de-energizes the lock hence disabling security
They are expensive especially when compared to mechanical locks and some additional hardware must be bought if they have to be operated safely.
For investors who build high security offices, buying the magnetic locks can be good because the locks enhances the security of the offices and bolsters the demand for the offices.